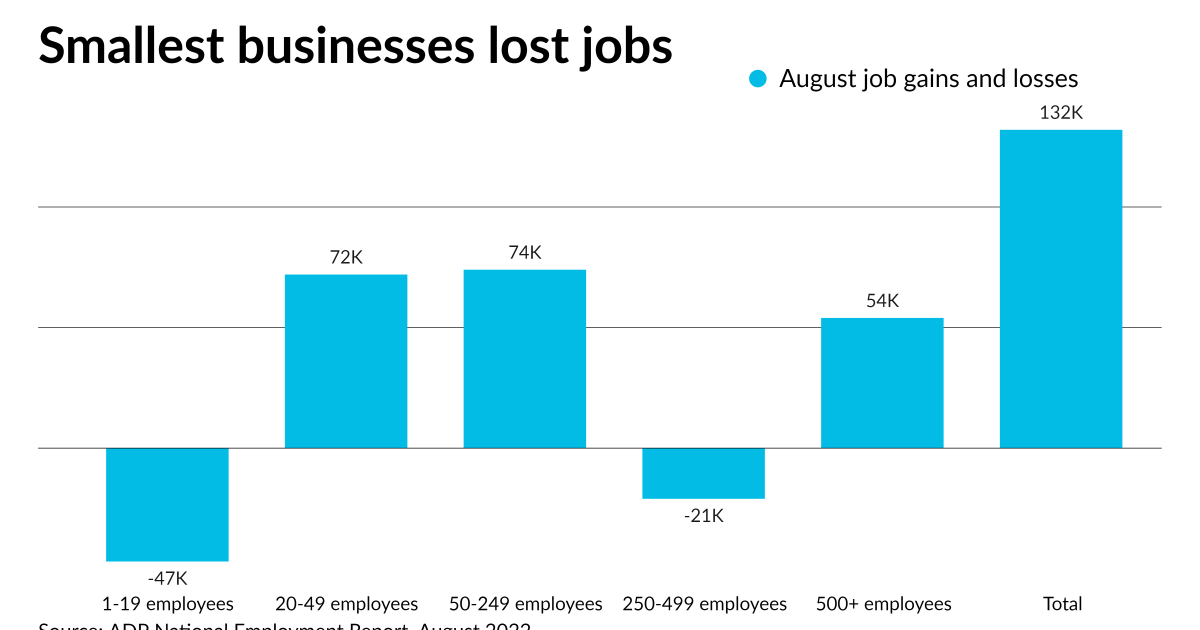 Overall, employment figures represented a decline from July, when the economy added nearly 270,000 jobs, and payroll growth also slowed in July compared to June. Job losses occurred in professional and business services as well as in financial activities in August.

“This is the second month in a row of a slowing trend we’ve seen in the new data set,” ADP Chief Economist Nela Richardson said in a conference call with reporters. “We believe these numbers suggest a shift to a more subdued pace of hiring that we expect to see materialize over the course of 2022, as companies of all sizes try to read what has become a complex economic picture in terms of high inflation and also some very strong dynamics in terms of labor demand.

The services sector accounted for the bulk of job increases, gaining 110,000 jobs, including 96,000 in leisure and hospitality. However, the professional and business services sectors lost 14,000 jobs, according to ADP, while the financial activities sector lost 20,000. Richardson said both sectors were showing signs of slowing. The goods-producing sector added 23,000 jobs, mostly 21,000 in construction.

In terms of earnings, the year-over-year change in annual earnings was 7.6% in August, matching monthly readings since the spring. In contrast, at the start of 2021, annual salary increases were around 2%. Yet while the pace of wage increases has been strong, its growth has flattened in recent months. Those who changed jobs saw the biggest increases, at 16.1%, while those who stayed saw only a 7.6% increase, below the rate of inflation. In professional and business services like accounting and tax preparation, the annual salary increased by 6.8%, while in financial activities jobs like banking, the annual salary increased by 7.4% . Both were below the overall average of 7.6% across all sectors. The sector that saw the highest wage increase was leisure and hospitality with 12.1%.