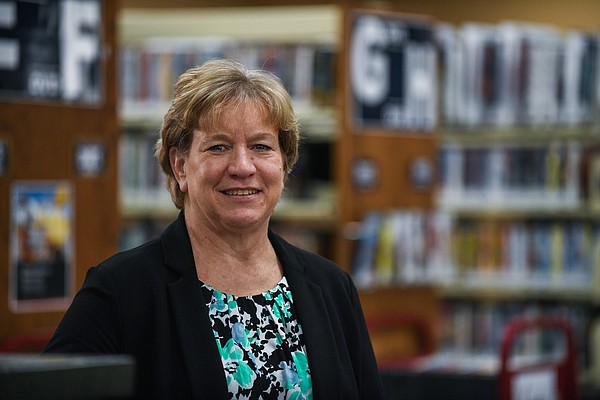 Manage (accounting) books – and much more – in the library

By Travis G. SchultzMarch 7, 2022No Comments

Twenty-seven years ago, Betty Hagenhoff saw a job posting for a business manager/accountant at the Missouri River Regional Library.

She got the job and she’s still here.

“It was a good fit,” she said. “The people were amazing, the library in general felt comfortable, and I liked the mission of the library.”

Nearly three decades later, Hagenhoff took on more duties and became deputy director of the library. At the end of May, she plans to retire to spend more time with her husband, Randy, on their farm, camping and with their three children and three grandchildren.

“My husband and I made a pact to retire early,” she said. “We operate a cow-calf operation and we look forward to doing a lot together.”

She also hopes to pursue other hobbies, such as tying quilts and hiking.

Hagenhoff’s duties have always gone beyond bookkeeping. In addition to taking care of budgets, monthly financial statements and audits, she is involved in projects for installations and … library books.

During her second year at the library, she became involved in what was a new venture at the time. Adult Basic Literacy Education (ABLE) had started a fundraiser for the sale of used books and quickly realized they were taking on more than they could handle.

The library, run by Hagenhoff, therefore began partnering with ABLE for the book sale, which turned into a four-day sale of some 200,000 books that fetch around $50,000.

This year the sale returns after a sabbatical last year due to COVID-19. It starts Wednesday with a preview from 4-8 p.m. The event takes place at the Knights of Columbus of St. Martin. Admission is $5 for the first day and free for the remaining days of the sale. On Thursday and Friday, it will take place from 9 a.m. to 8 p.m. On Saturday, it will be from 9 a.m. to 1 p.m. Saturday is bargain day — you can pay $5 to fill a box of books.

“It takes a small army to make that happen between moving the books and putting everything in place,” Hagenhoff said. “It’s a daunting task, but it’s fun.”

She hopes people will remember her as a good steward of taxpayers’ money.

“We’re not frivolous. We don’t go out and spend wildly. We provide good service for the money we have.”

Even in retirement, she will continue to support the mission of libraries.

“No matter your life journey, they have something for you,” she said.

In the digital edition, Betty Hagenhoff explains why she has enjoyed working at the Missouri River Regional Library for 27 years.